The 93,000 m2 Logistics Park Cefin Arad is in the process of being added to CTP’s expanding Romanian portfolio, under the name CTPark Arad. CTP, Europe’s 4th largest industrial developer, continues to look at new opportunities outside of its home-market the Czech Republic, and Romania is considered the next key market for the global expansion of CTP’s award-winning CTPark Network.

The new CTPark Arad will offer the company’s signature A-class premium property, and units available from 1,000 m2 with the possibility of greenfield expansion. The park is especially suitable for manufacturing and logistics companies, particularly those looking to take advantage of CTP’s full-service plug & play solutions. Current tenants of the park include Gebruder Weiss, Schenker and Gefco.

The park sits on the southwestern outskirts of Arad, 30km from Timisoara, Romania’s third largest city. The Arad-Timisoara agglomeration is favoured by investors involved in manufacturing and logistics thanks to its ideal location in the West of Romania on major transport routes linking central and southeastern Europe. Further industry growth is also supported by attractive labour costs, a skilled workforce and supportive local government. The Arad-Timisoara agglomeration is home to a cluster of foreign investors including Continental, Flextronics, Procter & Gamble, Linde Group, Draxlmaier Group and FM Logistic.

Remon Vos, CTP CEO states: “Romania is an important growth market for CTP, and we believe that the time is right to expand the CTPark Network into the region. More than 37,000 people are employed in our parks in the Czech Republic alone, so CTP’s Romanian entry can be seen as a key driver for lowering unemployment rate in the cities and regions in which we locate our parks. 400 international companies call the CTPark Network home and I know that many of these companies are actively looking for opportunities in Romania.”

Arad is the most important trans-European road and rail transportation junction point in western Romania, included in the 4th Pan-European Corridor linking Western Europe to South-Eastern European and Middle Eastern countries. The city has an extensive light rail network (second only to the country capital of Bucharest) and several bus lines covering most of the city's neighbourhoods and suburbs. Arad International Airport, with the largest and most modern cargo terminal in western Romania, is situated only 4 km west from downtown Arad and is directly connected to the Arad west bypass road, part of the A1 Motorway. 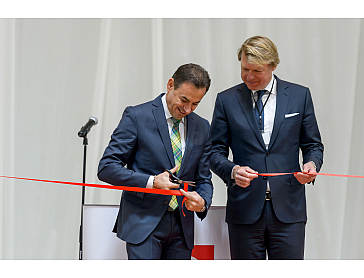 Our site stores and uses cookies to give you the best experience of use.